On Tuesday, Democrats flipped our 43rd state legislative seat with the victory of Wisconsin state Senator-elect Caleb Frostman. Working families in Wisconsin want leaders who will fight for the issues that matter to them. They know Democrats like Caleb have their back, and Tuesday’ election was further proof that when we organize and lead with our values, we’re unstoppable. 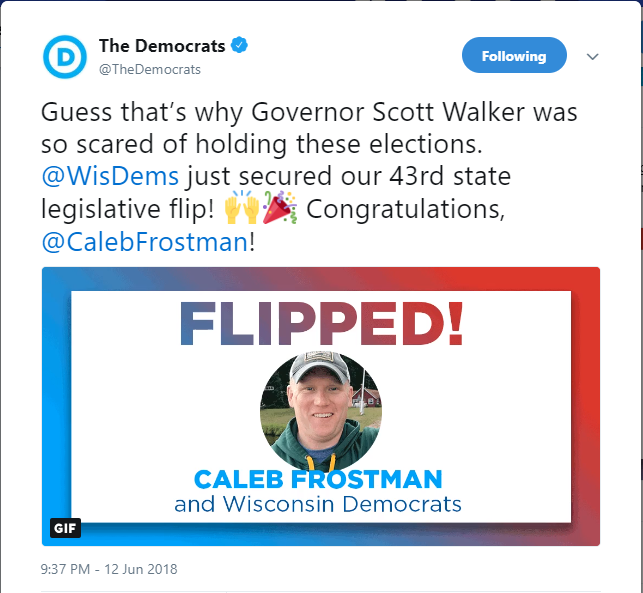 We also held successful primaries this week in Maine, Nevada, Virginia, North Dakota, and South Carolina, as Democrats across the country are getting fired up and organizing to carry our candidates to victory in November.
And on Wednesday, London Breed made history when she became the first African American woman elected to serve as mayor of San Francisco. Mayor-elect Breed is going to be a steadfast champion for the thousands of hardworking San Francisco families she represents, and I’m excited for everything she’ll accomplish as she fights with the Democratic values we all share.
Convention 2020
Today we officially announced the dates for the 2020 Democratic National Convention, which will be held from July 13 to July 16. We consulted with party leaders, previous campaigns, and rank-and-file Democrats to pick a week that will put our nominee in the strongest position possible to beat Donald Trump, or whoever the Republican nominee may be. My priority is to ensure that the 2020 nominating process is the most open, fair, transparent and inclusive in our party’s history. That’s exactly why the DNC started this process early and before we have a full slate of candidates running for president. More to come soon as we work to pick out the ideal location for a fun, exciting and successful 2020 convention.
Fighting for Families Affected by Hurricane Maria
When I visited Puerto Rico last fall, I witnessed hardship unlike anything I’d ever seen. Homes destroyed. Businesses washed away. Families searching for loved ones amid the wreckage of the lives they once knew. 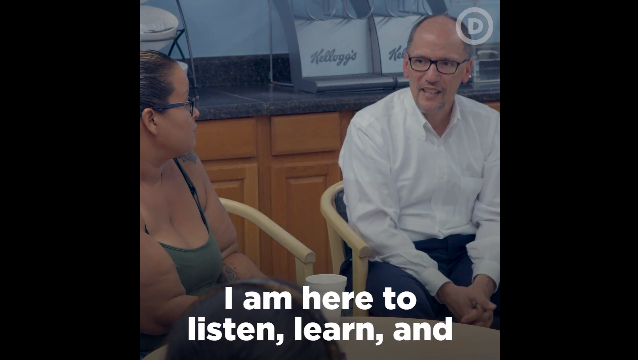 A couple of weeks ago, I traveled to Orlando to spend more time with some of the families displaced by Hurricane Maria. I listened to their stories of suffering and their pleas for support, and I heard from community leaders and elected officials about what they’re doing to help the tens of thousands of Puerto Ricans relocating to the mainland. The common thread in these conversations is that Gov. Rick Scott and the Trump administration have not done nearly enough to help these families.

I published a piece in the Orlando Sentinel this week about the failures of President Trump and Gov. Rick Scott to bring some relief to the struggling island. You can read the full piece here in English and the Spanish version here.

A Disastrous Supreme Court Decision on Voting
The conservative justices on the U.S. Supreme Court issued an opinion this week allowing Ohio’s aggressive voting roll purges under the National Voter Registration Act. Make no mistake, this case was about nothing more than Ohio Republicans trying to tilt elections in their favor by blocking communities of color from the ballot box – all under the guise of preventing ‘voter fraud.’ And the court’s decision will no doubt embolden Republicans in states across the country in their efforts to remove millions from their rolls simply for not voting.

But our fight is far from over. Democrats believe we should be making it easier for people to vote, not harder. We know our democracy is stronger when more people can participate. And we will keep fighting to protect and expand the right to vote for all Americans, even if Republicans won’t.

Remembering the Victims of the Pulse Massacre
This week, we observed the second anniversary of the Pulse nightclub massacre, one of the deadliest mass shootings in American history. It was an attack on the LGBTQ community, the Latinx community, and LGBTQ people of color everywhere. It was an attack on the American people and the values of diversity and equality that all of us should cherish. And it was an all-too-common reminder that our nation is in dire need of common-sense gun reforms. We can honor the lives lost that night by recommitting ourselves to the fight for a world where no one faces discrimination, where no life is taken by hatred or bigotry, where everyone is treated with respect and dignity – no matter who they are or who they love. As we celebrate Pride Month, we recognize that the fight for LGBTQ equality is far from over, and the Democratic Party will continue to stand with LGBTQ communities in America and around the world who are fighting for the rights they deserve.
Trump’s Heatless Abandonment of Domestic Abuse And Gang Violence Victims

Cruel. Sick. Heartless. Inhumane. There simply aren’t enough words in the English language to fully capture the depravity of this administration, which ended asylum for victims of domestic abuse and gang violence this week. This is an attack on some of the most vulnerable people in our society, and it will affect thousands of families fleeing violence and seeking safety for themselves or their children.

Democrats believe diversity and compassion are our nation’s greatest strengths. And we will continue the fight to protect and expand opportunities for these families and all Americans.

Fighting for A Free and Open Internet

A free and open internet is critical to our democracy. By undoing net neutrality this week, Donald Trump’s FCC is threatening online equality in a way that could hurt our economy and hamper our nation’s potential for innovation. As of this week, wealthy internet service providers will be able to play favorites, leaving millions of Americans with slower and more expensive internet.

But while Republicans punish the American people so they can fill the pockets of big telecom corporations, Democrats believe the internet must remain a level playing field. That’s why House Democrats are demanding a vote to restore net neutrality. And that’s why Democrats will keep fighting to make sure everyone can benefit from the power and potential of our nation’s technology.
Yours,
Tom
––––––––––––––––––––––––––––
Tom Perez
Chair
Democratic National Committee