Throughout this past year, the Democratic National Committee has been focused on rebuilding and electing Democrats up and down the ticket. Through the “Every ZIP Code Counts” program, the new DNC is investing in state parties and races all across the country. The result? Democrats have flipped 33 seats from red to blue, including in deep red districts that Trump swept in 2016.

It has been another great week to be a Democrat. Congratulations to Tim Keller and Cynthia Borrego on their election as the next mayor and city councilor of Albuquerque, New Mexico, flipping both seats from red to blue. Voters are sick and tired of Donald Trump’s Republican Party, and they’re sending Democrats like Tim and Cynthia to City Hall to fight for working families. The DNC invested in the Democratic Party of New Mexico to support the important work being done by the state party and to organize and mobilize Democratic voters behind our shared values.

I also want to congratulate Allison Ikley-Freeman on her Oklahoma State Senate victory, which flipped yet another seat from red to blue in a district that Trump carried last year. At 26, Ikley-Freeman is the third openly gay person to be elected to the Oklahoma legislature.

As we saw earlier this year, Oklahomans are voting for Democrats in these deep-red districts because they know our candidates will work to resolve the budget crisis facing Oklahomans and help build an economy that works for every working family, not just a wealthy few. The DNC is proud to have invested in this race and we will continue working with the Oklahoma Democratic Party to elect Democrats up and down the ballot.

On Thursday, House Republicans passed their version of the GOP tax scam. Republicans are slashing education funding, making it more expensive to buy a home, blowing a $2 trillion hole in the deficit, and gutting Medicare funding for seniors – all so they can fund another giant tax giveaway to wealthy corporations and the top 1%. Even the author of the bill said that people most excited about it are ‘big CEOs.’ What’s more, Senate Republicans have shamelessly turned this tax bill into another health care repeal attempt.

This bill was clearly written for Donald Trump and his wealthy friends on Wall Street, not for hardworking American families. You can read a piece I wrote for NBC about how this plan is disastrous here, about how this bill affects Latino families here. 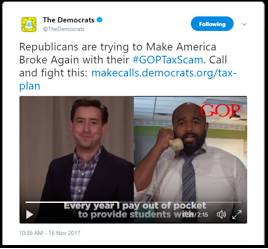 Democrats believe that we should reform our tax system to work better for the middle class. And we will fight tooth-and-nail to make sure this bill never makes it to Donald Trump’s desk. We’re urging Americans everywhere to call their Republican senators right now at (202) 224-3121 and tell them to oppose this bill. 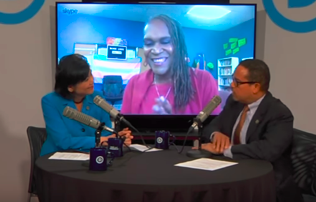 On this week’s episode of Democrats Live, Keith Ellison hosted Rep. Judy Chu for a discussion on the GOP’s plan to slash taxes for the richest 1% and corporations, at the expense of hardworking Americans. They were also joined by new Minneapolis City Councilwoman-elect Andrea Jenkins, the first openly transgender person elected to a major city’s city council. They talked about what inspired her to run, what last week’s wins meant for Democrats across the country, and how the GOP tax bill would affect her constituents in Minnesota. Check out the latest episode at live.democrats.org. 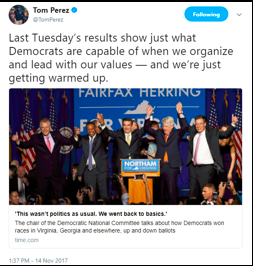 From Albuquerque to Oklahoma, Democrats are flipping state and municipal seats and building a blue wave up and down the ballot across the country. You can read my recent piece in TIME about how Democrats secured major victories earlier this month and put Republicans on notice.

This is the new DNC and this is just the beginning. Democrats are going to keep organizing and leading with our values, and that’s why we’re going to flip even more seats up and down the ballot in 2018 and beyond.