Our thoughts and prayers continue to be with all those affected by this devastating storm. In times like these, we need to be united as a Democratic family. We’re in this together, and we need to be there for our friends and colleagues in Texas and Louisiana long after this storm passes and they begin to rebuild. Our very own DNC Vice Chair and Louisiana State Senator Karen Carter Peterson is home doing everything she can to help her community in this difficult time.

Unfortunately, President Trump has not shown the same regard for the victims of this vicious storm. Last Friday night, he used the hurricane as cover to pardon his buddy Joe Arpaio and sign an order banning transgender people from joining the military. That’s not presidential, that’s a coward.

Prejudice doesn’t deserve a pardon, and discrimination has no place in our democracy. Sheriff Arpaio used racial profiling to tear apart immigrant families and devastate Latino communities. At the same time, he failed to investigate hundreds of crimes, including dozens of reported child molestations. Arpaio’s actions are anything but admirable. That is why I sued him when I led the Justice Department’s Civil Rights Division, and that’s why the voters of Arizona kicked him out of office in November. On Monday night, I joined Chris Hayes on MSNBC’s “All In” to discuss the case we brought against Joe Arpaio and how Trump’s pardon is an insult to justice. You can watch the full interview here.

Trump’s pardon of Arpaio is hardly the only disgraceful decision he’s made in regards to our nation’s immigration policies. Trump has also reportedly decided to end the Deferred Action for Child Arrivals (DACA) program, which will result in thousands of DREAMers losing their ability to go to work and contribute to their communities every week.

Deportations will tear families apart and drive immigrants back into the shadows. And our economy will face a devastating blow, costing our country billions in GDP over a decade.

Democrats believe that DREAMers share our values and strengthen our nation. We believe in fixing our immigration system, not uprooting lives and shattering families. And we will continue to fight for the immigrants who contribute to our country every day. That’s why the DNC has been working night and day to combat Trump’s lies about DACA and share the stories of young immigrants who would be forced back into the shadows by Trump’s decision.

Thankfully, we did get some good news in the fight for immigrants’ rights this week. A federal judge has halted the enforcement of Senate Bill 4 in Texas, which would have taken effect on September 1st. As Texas families continue to brave this hurricane, they need nothing less than their country’s full and united support—not a deportation force that would divide communities and endanger people’s lives. The court’s decision was an important step toward protecting families during this devastating storm and defeating this disgraceful law once and for all.

After only a brief visit to Texas, Trump travelled far from the flooding to launch his so-called “Tax Tour” on Wednesday. It should come as no surprise that Trump’s tax push is being led by two Wall Street executives. This is the same rigging of our economy that Republicans have tried for decades: slash health care, Social Security, education, infrastructure, and vital programs for working families. Under Trump’s plan, the richest Americans would become even richer at the expense of middle-class families.

Democrats believe that not one penny of tax cuts should go to the 1%. Instead of trying to benefit themselves, Trump and Republicans should work with Democrats to enact real, bipartisan tax reform for the middle class.

Workers, not the wealthy, deserve a break. That’s why I’ll be spending Labor Day weekend on the ground in Virginia, campaigning for Democratic candidates up and down the ticket ahead of November’s election, including gubernatorial candidate Ralph Northam. The DNC is all-in in Virginia and has already invested an initial $1.5 million in the Virginia governor’s race, which is one of the largest investments to-date by a Democratic group and includes the immediate doubling of the number of grassroots organizers on the ground and investments in digital, data, and tech infrastructure.

Tune in on Monday at 6:00 p.m. on Facebook or at Live.Democrats.org.

Democrats are also focused on making gender equality a reality in the workplace. On Women’s Equality Day last Saturday, we celebrated the progress we’ve made and recommitted ourselves to taking on the battles not yet won. DNC CEO Jess O’Connell wrote a piece in Refinery29 on the challenges ahead and how we must organize to get more Democratic women elected up and down the ballot. 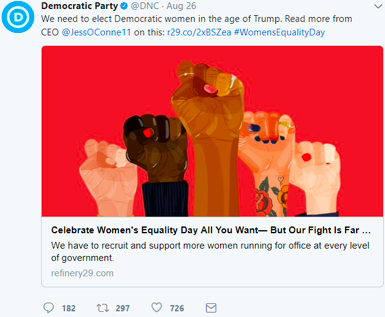 Finally, I want to thank everyone who was able to join us yesterday for the DNC Members Action Plan call. We are less than fifty days away from our October meeting in Las Vegas, Nevada and less than seventy days from Election Day. We have a lot of critical work to do before then, and your support will be instrumental to the success of these programs. As we organize our communities and hold Republicans accountable, we need your continued leadership, support, and activism. That’s why we devised the Fall DNC Member Action Plan: five easy steps that we ask members to take to help elect Democrats up and down the ballot. Click here for the DNC Member Action Plan. If you have any questions, please reach out to Director of the Secretary’s Office, Miles Fernandez at Fernandezm@dnc.org.

I hope you have a safe and happy holiday weekend.